As it happens I try to render many voxels in my latest project Monolith (Project page is still pending, but you can look on github for it).

What is a Voxel? A voxel is a small volumetric element - it is a pixel in 3D. The nice things with them is that the logical arrangement in a 3D textures allows simple algorithms, e.g. for destructions. That is why I want to use them.

What is many? Well Monolith is a space strategy game based on voxels. Therefore spaceships and planets and solar systems and ... are made of voxels. To store the earth in 1 m³ large volume elements we would need 10^21 of them. Even if we store only one byte for each this requires 962081 PB RAM or disc space. So, many is as much as possible.

Which approaches do exist?

First of all I decided that I want to render voxels directly in the form of boxes. There are people how don't like that and yes there are algorithms as marching cubes to create continuous surfaces but I considered real cubes as the way to go. They allow much more dynamical updates because not every change causes a recomputation of complex meshes. Following Ideas can suffice for this task:

It is common practice to create billboards in form of quads inside a geometry shader. Why not whole cubes? Depending on the vertex normals (smoothed or per face) this requires either 16 or 24 vertices. Both are possible but effectively to large to be efficient. On the other hand we can decide if a cube is visible before any triangle is created. It happens that backface culling for a cube will always remove one of two opposite faces. Therefore my shader emits at most 12 vertices for 3 quads.

For a single voxel based model all cubes have the same size and rotation. One could compute some offset vectors to a voxel center in the shader, but since these vectors are equal for all instances they can also be precomputed. To avoid two vector-matrix transformations the vectors must be added in object space (before transformation) or in projection space (after transformation of the center). I did the second one.

In projection space frustum culling is easy. The homogeneous coordinate must be inside the unit volume:

. The z coordinate equation depends on which clipping planes are used. These are different: [0,1] in DirectX and [-1,1] in OpenGL. Using this test on the center would cause voxels to disappear to early. So I added an offset and "made the frustum larger".
C++

Then I added backface culling. This got a bit more complicated. I did not find a way to do this in projection space directly. A direction in projection space can be transformed to view space with a single multiplication (assuming you have the same projection matrix as I have) with (1/mProjection[0][0], 1/mProjection[1][1], 1/mProjection[2][2]) . As last trick I added a masking for rejecting faces which are "inside". If there are two neighbored voxels the two sides which are shared in between are never visible.

Remarks: Of course you need to emit normals, texture coordinates or other stuff you need to colorize your voxel. I do lightning on voxel basis to reduce the export bottle neck. Further the code above is only for two of the six sides. It must be replicated for the other two directions.

Geometry shaders aren't that fast, especially if the amount of data increases. I encoded the invisible masking and the position inside a single 32 bit integer value. There are 6 bits for the mask of each side and 3*8 bits for the position, the remaining 2 bits are not used currently. This allows to address 256^3 positions which leads to the need of a chunked approach for larger models.

Monolith is using a 32^3 chunk size only because, despite the technical necessity, this allows an efficient memory managment as well as easy LOD and large scale culling algorithms. More information might come in a future post.

The image was made with an Geforce 640M LE. It draws 32368 voxels per millisecond. Let me know if you achieve higher rates with another approach! 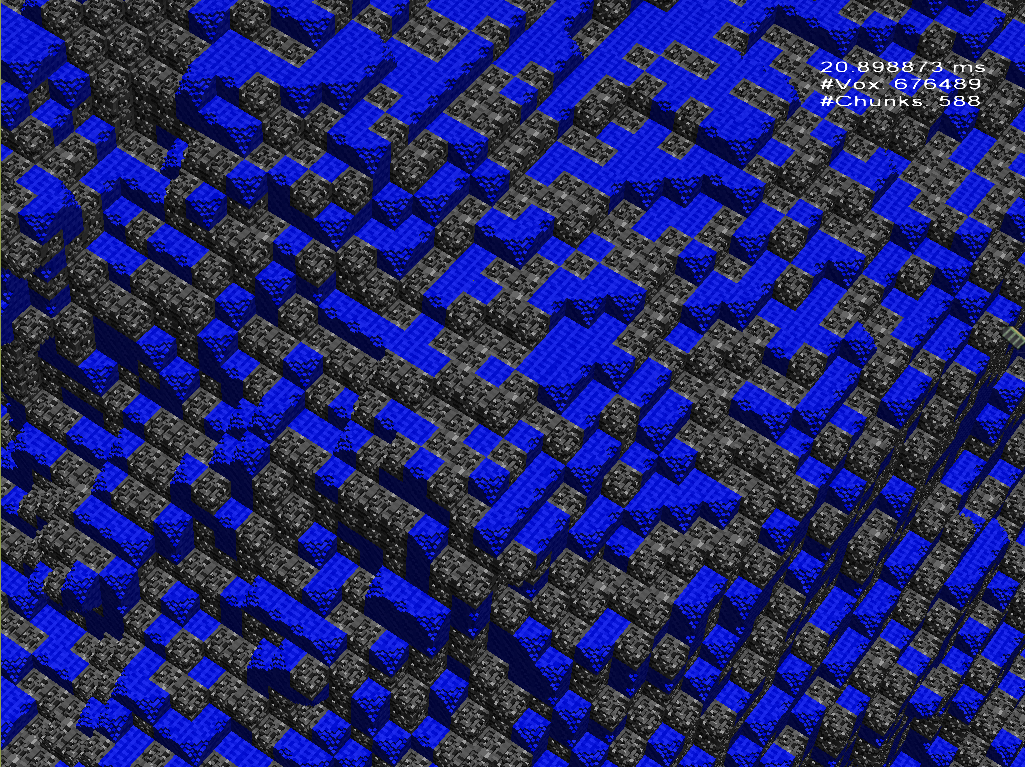 Each different colored area is its own voxel